More than 50 % energy saving.
Higher speed than ever – in the water.

The basics of the „Inverse ship” was invented 100 years ago. 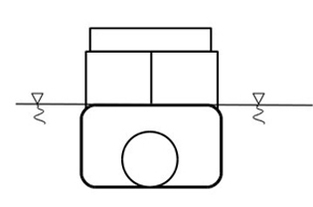 The Fig. 1 and 2. show the key idea: All the moving water flow through the hull in an internal channel.

It would be easy to build an inverse ship if the diffuser is effective. The plain conical diffuser isn't effective enough. There are some uncontrollable motions generated in the practice.

Our calculations and tests show, that our design solved the problems above.

The theoretical speed limit of the ship is more than 500 km/h with our solution. More than 90% of the moving water flow through the ship's body in the Venturi-like channel.

It means: More than 90% of the motion energy of the water is controlled inside of the hull – instead of the spreading away by the waves.

There is no regular wave at the bow and at the stern of the hull.
While the inverse ship causes much less waves and swirl than most of the ships generate, the energy (propulsion) need is less than it is usual for a regular ship with similar speed and mass. 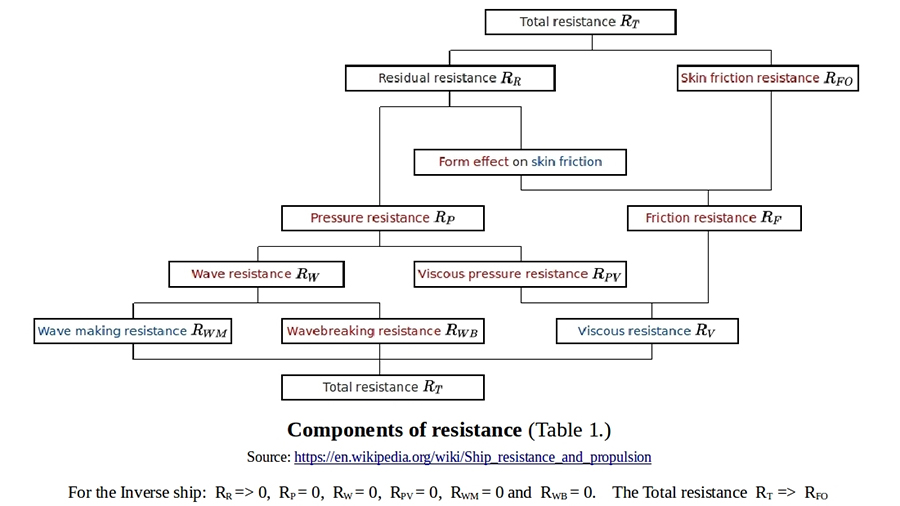 There were prepared 4 different hull by CAD and tested them by CFD program. The length is 198 mm and the initial and final diameters are 42 mm. The smallest diameter is 21 mm. The propulsion is not showed at the left hand side. The initial speed, produced by the propulsion, is applied at the left side of the confuser.
See the velocity distribution diagram of the Hull 1 on the Fig. 3. It has conical confuser and empty conical diffuser. The initial water speed is 10 m/s. The water with 1 bar static pressure and 12 oC temperature flows from left to right through the Venturi-like pipe system.

The Hull 3 can recover more than 90% of the motion energy of the water stream in to propulsion in the diffuser. 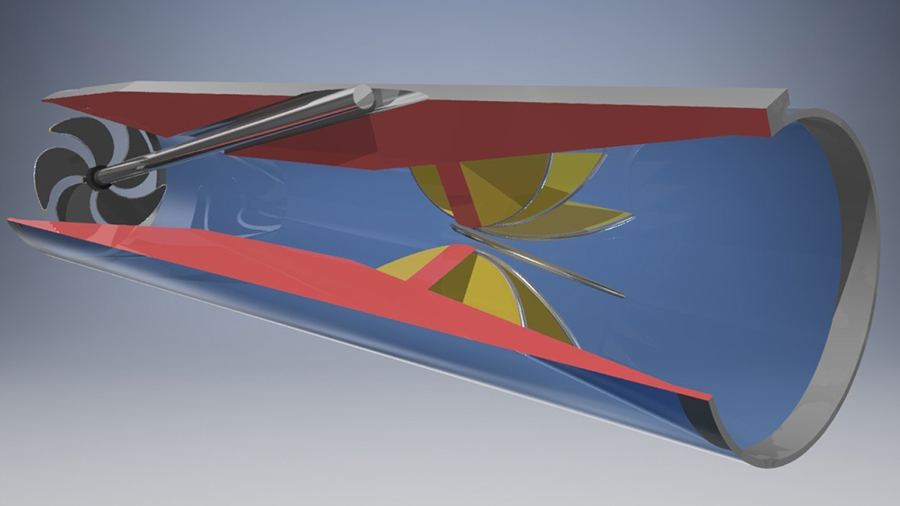 We printed different hulls in 200-300 mm size and tested them in a test channel. The results are summarized in the video:

The size of the test channel: 4.0 x 0.4 x 0.2 m (L x W x H).
The first hull has electric motor – propeller propulsion. See Fig. 15. The mass of the hull is 165 g. The mass of the test cart is 562 g. The nominal power of the motor is 31W, the efficiency is 45%. The acceleration started at 0.5 m and the stop process started at 3.0 m distance.
The overall efficiency of the propulsion depended on the hull construction.
The propeller located in the convergent part of the channel. It drives all the moving water through the channel inside of the ship hull. At the end of the channel there is a conical diffuser with a conical diffuser unit inside to make the water slow down. This is equivalent to the CFD Hull 2. The cross section of the channel at the beginning and the end (and the ship in the water) is the same, so the speed of the water is same too. 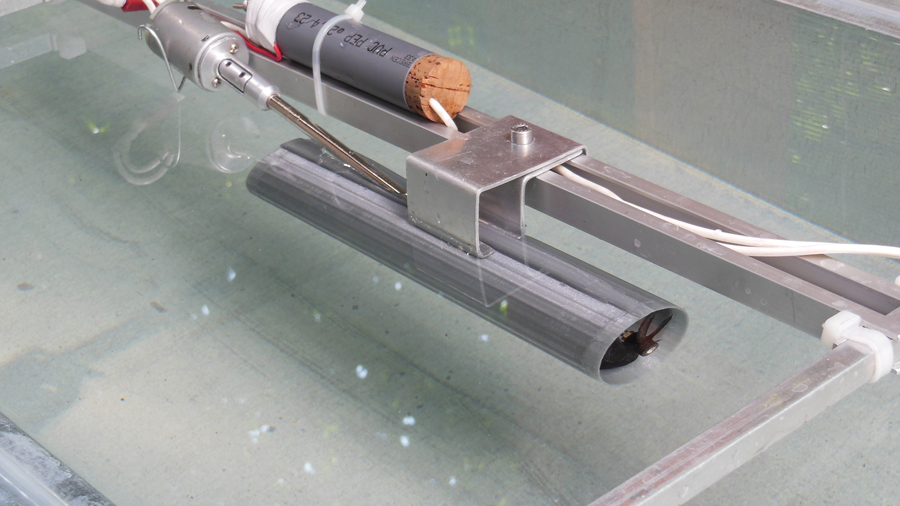 On the video time 0:00 – 0:36 there are small waves, mainly caused by the fixing part of the cart. There is no wave at the bow and only small wave at the stern. (The propulsion accelerated and moved the 3.4 times heavier cart. )
On the video time 0:37 – 0:43 and on the initial picture of the video there is a test without the conical unit inside of the diffuser. This is equivalent to the CFD Hull 1. The waves are larger and you can see some tangential vortex in the center of the diffuser and after it for some 50 mm distance.
This vortex was finished in a periodical swirl.
On the video time 0:44 – 1:00 there is a submarine hull (Fig. 16.) pulled by the cart (no internal propulsion).
There are significant waves and big flowing out from the channel. It is regular result with a submarine hull. 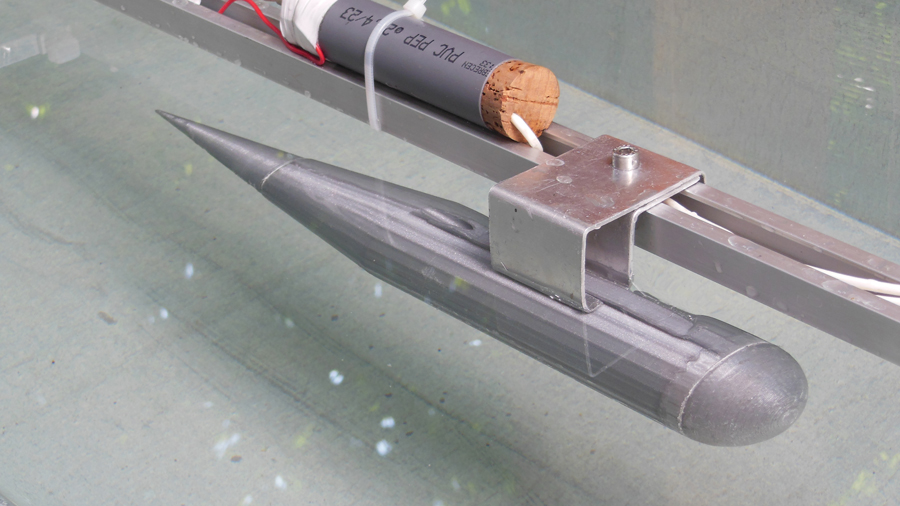 On the video time 1:02 – 1:21 there is a jet system with own propulsion. There are small waves at the bow, but there are significant waves at the stern. It looks like a water jet propulsion on a SWATH. The water jet transports away almost the half energy of the propulsion without any use. (Fig. 17.) 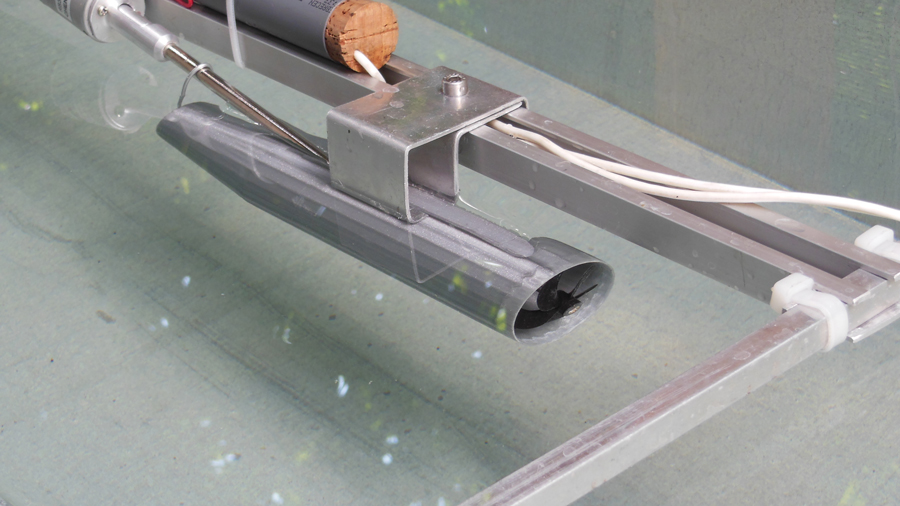 The cart (moving frame) generates some waves that you can see on Fig. 18. and Fig. 19.
This is the "basic noise" of the fixing part of the cart. 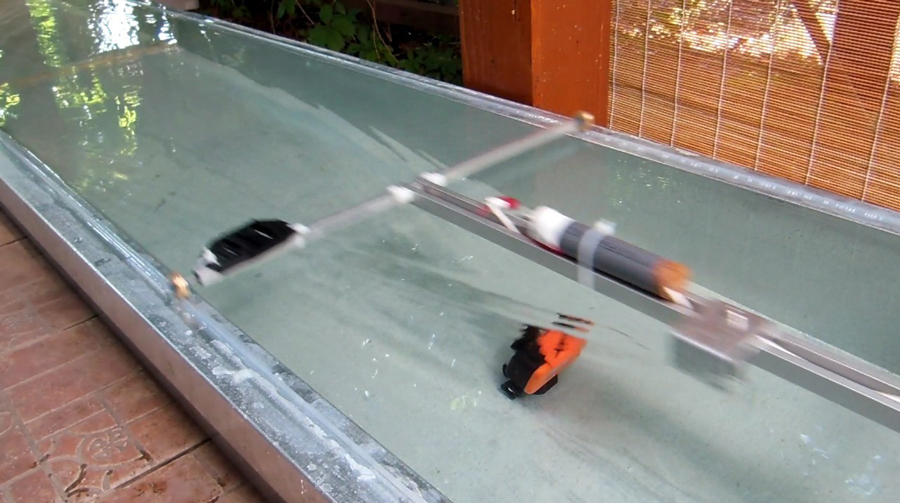 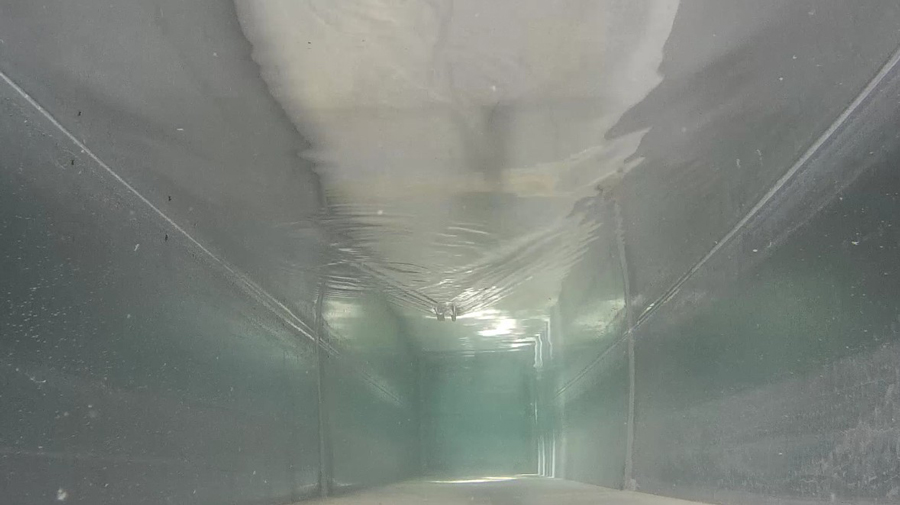 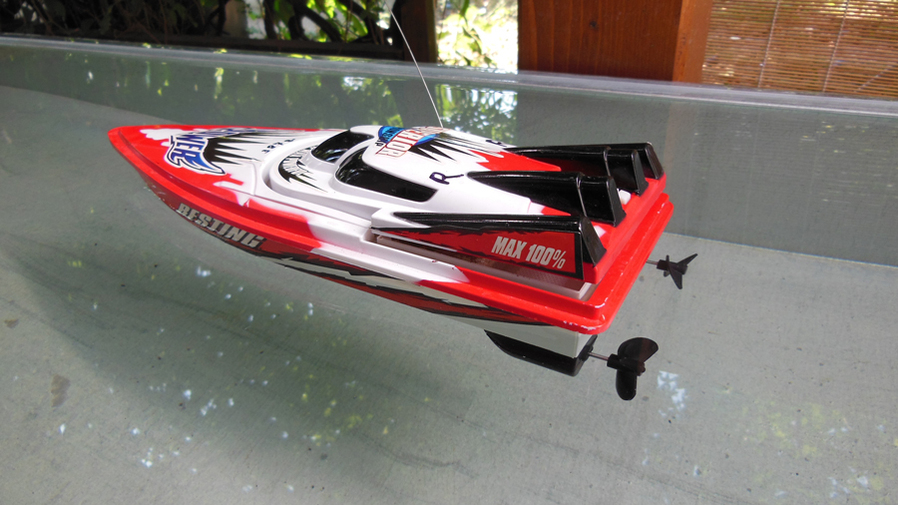 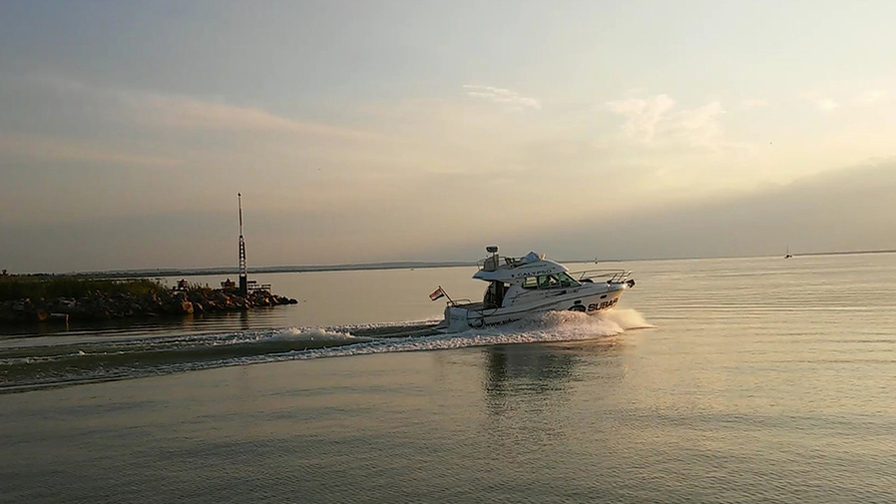 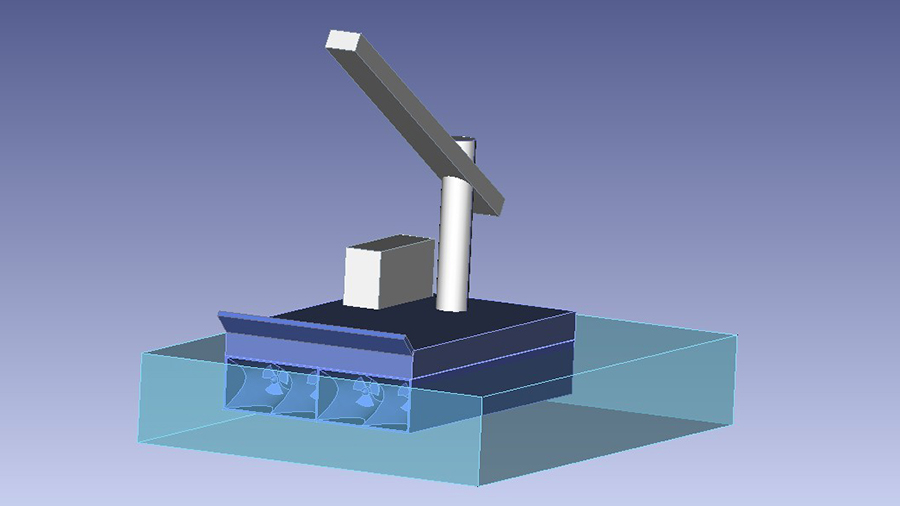 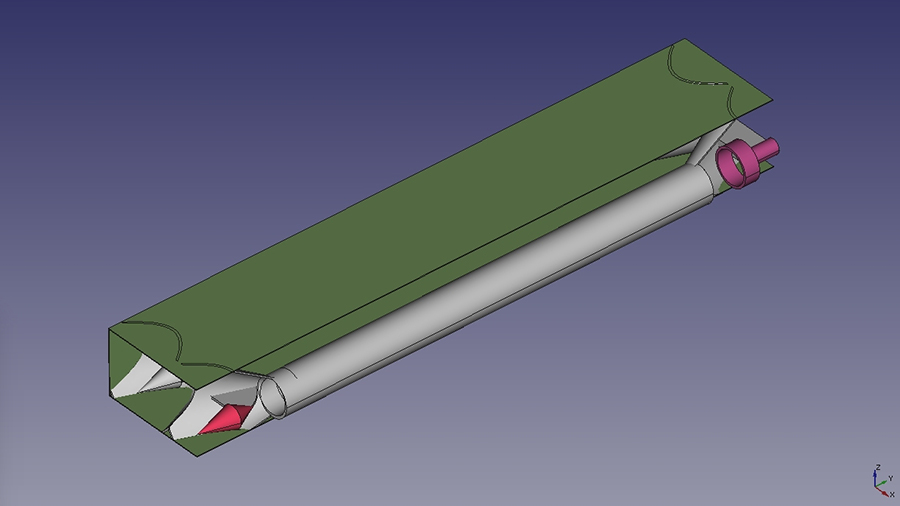 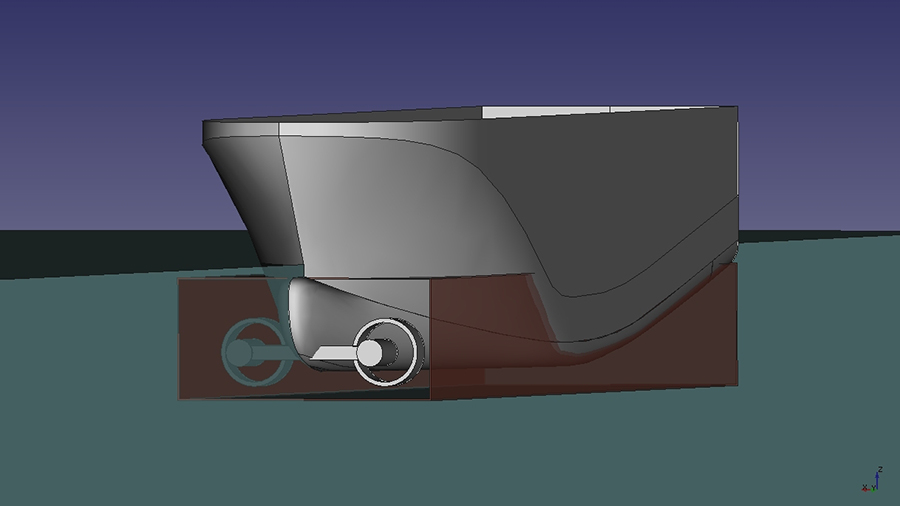