The Energy Transformer Device (ETD) has a controlled and opened process which transforms kinetic energy of the gas molecules to mechanical work – without any additional energy source). The sketch of the process is showed on the Fig.1. Kinetic energy of the shocks / collisions accelerate gas molecules in the converging nozzle (confuser) because of the pressure difference. At starting process we generate the pressure difference by an outer drive and lather the process keep it up in steady-state. Accelerated gas molecules generate mechanical work on the turbine while their kinetic energy is reduced. The total / stagnation pressure of the exhaust is increased, which is caused by the reduced entropy of the gas flow. The suitable design of the impulse-turbine results the higher stagnation pressure at exhaust than the stagnation pressure was at intake.

Average molecule moves with average velocity to a random direction in static gas on Fig.1. Endpoints of the velocity vectors define a concentric circle around the molecule on a 2D plane. It would be a sphere in 3D. At point 1 intake the average velocity of the molecules with 273 K temperature is 490 m/s. Colder molecules move with velocity 400 m/s at point 4. The „intake” shows the volumetric work of the ambient air and the „exhaust” shows the volumetric work of the ETD against the ambient air with reduced temperature and volume. If we accelerate the gas by the pressure difference, as the Bernoulli equation defines, the velocity vectors end on the same circle, but they are eccentric to the molecule at point 2 and 3. The dislocation is equal to the green flow velocity vector. The sum of the static and dynamic pressure gives the total, or stagnation pressure. At the stagnation point the molecule moves back to the center of the circle while the dynamic pressure is close to zero. 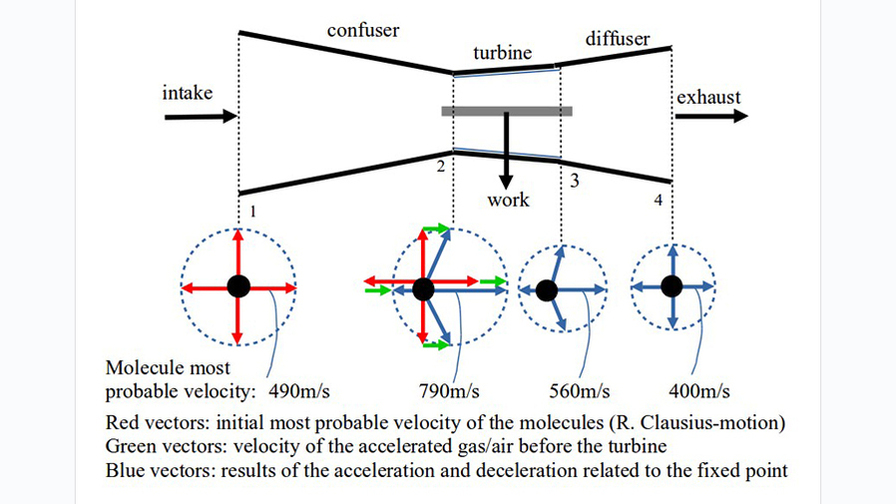 It has been written in several publications that the stagnation- and static pressure are increased in the subsonic gas flow during the entropy reduction (cooling). The stagnation pressure is higher at the exhaust than it was at the intake of the impulse-turbine. Higher stagnation pressure at exhaust results the closing of the cycle-process of the ETD.

Theoretical evidence of the ETD-process: The colder (ideal) gas / air flows out the ETD with higher stagnation pressure than the ambient air has. The-one question is: how are the energy dissipation of the real gas and friction covered by the extracted work in a real practice?


Results of some ideal cases are showed on Fig.3-6: 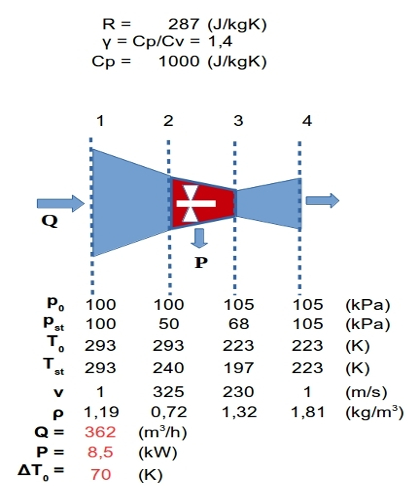 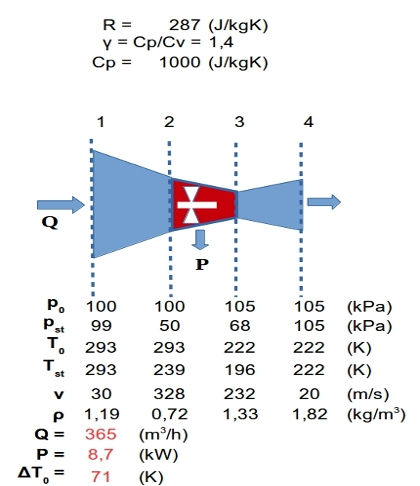 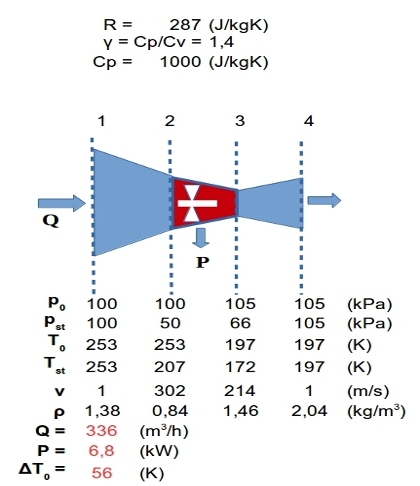 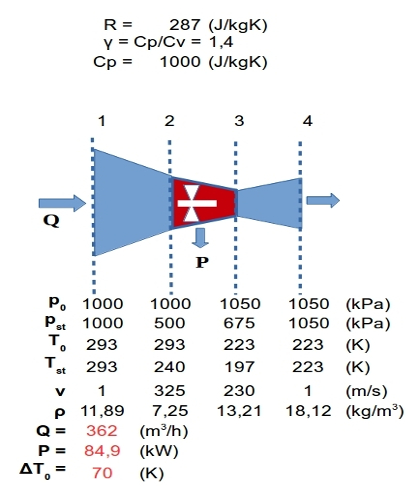